Illegitimate Children and a Widow’s Reluctance to Remarry

Dave Annal’s talk, “Lying Bastards”: the impact of illegitimacy on the records that our ancestors leave behind at the Register of Qualified Genealogists conference last month (September 2021), has stimulated me to tell the story of Maria Lown’s illegitimate children.

Betsey Makeman bastard daughter of Maria the Widow of William Lown, who was a Farmer living in the Fields below the Town.  She lives in a small House in the low Fields. This woman’s moral depravity is so great, that she prefers living in a state of Adultery with one Wm Makeman, to a state of Matrimony with the same Man!!

VIDE Dec 29th 1815 [Dec 9th].  NB. This abandoned woman might be Married but will not ! The Banns of Marriage have been published, but she prefers a state of Prostitution!  Remarking or having remarked, that She is already a Whore; & can be no worse.  Therefore, will even remain as she is!!! Sic malimores pravalebunt!!!  She submitted to be Married in August following

Given these comments what might you expect Maria’s background to be like?  Do you think she was accurately described?  Are you imagining her response was a potty mouthed torrent?  Has pity for a poor widow stirred you?  It is hard not to react to these entries, but let’s take a step back and look at the circumstances more closely.

Maria Copeland married William Lown in 1799.  She was his second wife, so became stepmother to his two children, Ann, and William, from his first marriage with Sarah Watson.  Maria and William Lown went on to have six children between 1800 and 1807, namely William, Moriah, Elizabeth, Snelson, Ann and Robert Snelson.  William Lown died in 1812 and was buried at Holbeach, a neighbouring parish.  There are no burials for any of the children indexed prior to his death, so I’m working on the basis that they had all survived to 1812.

So, at the time of becoming a widow, Maria had up to eight children to support.

Rapid remarriage, or the alternative of forming a joint household without marriage, is widely cited as an economic necessity for many widows.  Does it apply to Maria?

The 1815 baptism above identifies William Lown as a farmer and residence at “Fields below the Town”.   The occupation is a clue that William Lown may have owned or rented land.  I have not investigated land holdings in Whaplode, but he is in the manorial property records in neighbouring Moulton.

William Lown bought a copyhold plot of 6 acres 36 perches, consisting of two fields with a messuage (house) and outbuildings, in 1805 in the Manor of Moulton Harrington, located on the former common  near the hamlet of Seas End.  It is about 3 miles north of Whaplode village centre.  All records of the Lown family place their residence in Whaplode, which suggests that at least the house in Moulton and possibly the whole holding was rented out.

Why would a widow resist remarriage?

As a second wife, Maria was vulnerable to inheritance under primogenitor, which would have left real property to William Lown’s eldest son (aged 18).  Furthermore, she was potentially vulnerable due to customs of local manors that removed dower rights.  As a widow, Maria may have gained control of assets through guardianship of her children (eldest aged 12) and stepchildren (eldest aged  21).

William Lown did not leave Maria helpless.  He made a will appointing her as executrix, so she had control of the Lown family property.  I have not yet accessed the will at Lincolnshire Archives due to the pandemic, so don’t know the value of his estate.  It does not seem that Maria would  have needed to remarry through necessity straight away.

Social status is another possible reason for Maria Lown’s reluctance to re-marry.  She had been a farmer’s wife.  William Makeman was of lower status.  The baptisms of William Makeman’s legitimate children display an advancement in his status from labourer (1818), to horseman (1819, 1822) and then cottager (1825, 1826).

What happened to the illegitimate children?

William died on 21 September 1817, just 5 months old and less than 2 months after his parents married.  None-the-less curate Samuel Oliver continued his commentary in the same vein.

William Bastard son of the Widow, Maria Lown, A prostitute

Betsy was acknowledged by her father and was named Betsy Makeman when she married in 1839.  She married James Cooley, schoolmaster of Moulton, son of John Cooley, a farmer.  This was a good match as I know from my research of the Moulton manors that the Cooley family were significant landowners.  The marriage was performed by the same curate, Samuel Oliver, but without any commentary.

Why were the curate’s comments so vitriolic?

Samuel Oliver did not comment on every illegitimate birth beyond use of the term ‘illegitimate’.  In the 3 years between 1815 and 1817, there were 11 baptisms of illegitimate children out of a total of 170.   Apart from Maria, one other person was the subject of vitriolic comment, this time a man who had child with another woman having abandoned his wife

Maria certainly answered back.  Was there dose of misogyny in his reaction?  Did he think a farmer’s wife should behave differently?  Did he fear that Maria might become dependent on the parish if she did not remarry?

Custom of the Manor – A Glossary: Homage

In common modern usage paying homage is to respectfully acknowledge superiority of someone or something. In the context of the manor, homage has more specific meanings. To do or make homage was a formal and public acknowledgement of the feudal relationship of a vassal (tenant) with the lord of the manor, a form of allegiance. Such an allegiance was one of the terms under which a tenant may hold land from his lord. The service of homage could only be made by tenants with an estate greater than for life and only be made directly to the lord himself.

Coke describes the oath taking ceremony. The unarmed and unguarded, bare headed tenant kneels on both knees and holds both hands up to the lord (symbolic of reverence and subjection). The lord incloses the tenant’s hands between his own (symbolic of protection and defense) while the tenant says:

” I become your man from this day forward of life and limb, and of earthly worship, and unto you shall be true and faithful, and bear you faith for the tenements that I claim to hold of you, saving the faith that I owe unto our sovereign lord the king”

Churchmen and unattached women (femme sole, single women or widows) could not become the lord’s man or woman, because they had commitments to God or a potential future husband. So they did an partial homage, swearing to be true and faithful only. 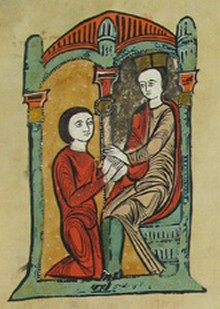 What did becoming the lord’s man entail? In the Court Baron or Customary Court, the lord’s men or homage, which acted as judges or jury, depending on the type of case. Duties included attendance at the court, reporting events affecting property rights (e.g. deaths of tenants), reporting breaches of the lord’s rights (e.g. encroachment of common land) and resolving disputes between tenants.

The legal Latin term for homage is homagium or humagium.

Custom of the Manor – A Glossary: Feudal

Feudal systems closely connected governance and land tenure. It was based on the relationship between two free men, a lord and a vassal. The lord gave the use of his land, rights and privileges to his vassal in return for a variety of services, including military service, money, labour, something symbolic, or prayers. Over time services were commuted to money rents.

A hierarchy of ownership developed with the monarch as the ultimate lord. The king’s vassals could pass on rights and privileges to their own vassals.

Feudal systems arose in parts of Europe between the 10th and 12th centuries. In England the feudal system was finally abolished on 1 January 1926 by the Law of Property Act 1922 and related acts.