This photo of my brother, Stephen, was emailed to me by his partner, Joan.  Digital photographs contain a wealth of information, so genealogists need to adapt analysis techniques to make to most of them.

First, what is in the picture?  Just like we don’t know who the people were in old photos, future generations won’t know who is in pictures being created now unless we annotate them.  Identifying when and where the picture was taken are steps to identifying who might be depicted in it and why it was taken.  This photo has clues in it.

The Lonely Planet Guide suggests a holiday trip and a possible location of New Zealand’s south island.  Checking WorldCat identifies the book as the 4th edition, published in September 2014.  The next edition is due for publication in October 2016.

The nearly empty wine glass and coffee suggests dinner has just been eaten.  It is still daylight however.  The garden in the background looks green so might suggest summertime.  During the southern summer in Christchurch, the largest city on New Zealand’s south island, sunset times vary between 21:11 on the summer solstice (22 December) and 19:41 on the autumn equinox (20 March).

Clothing, especially fashionable women’s clothes, can be quite an accurate dating clue.  The polo style shirt Stephen is wearing has been around for decades, so doesn’t help narrow down the date.

It is harder to find information about modern objects such as wine glasses, crockery and tableware than their antique counterparts.  I think wine glasses have got bigger in the last decade or so, but can’t point to any helpful reference.

So far, the approach I’ve taken has not diverged from analysis of traditional photos.  There is still a good deal more information in this digital image file.

Inside the digital image file

The format, size, shape, mountings, and annotations on the back of traditional photographs hold information useful for dating and analysis.  Likewise, digital images hold useful information in metadata that is embedded in or added to the file.  Viewing the metadata is possible using operating system functions (Properties for Windows, Get Info for Mac), but I prefer the free specialist image file tool, IrfanView, which offers more options.

Even without a specific date, the model of the camera is itself a dating clue.  This photo was taken with a smartphone, a Nexus 5X, first released in October 2015.  It was taken on 11 February 2016 at 20:07:21.  My after dinner, but before sunset, assessment checks out, assuming the phone date is using the right time zone.  According to the other dates recorded in the file,  it does not appear to have been altered.  The value for ‘Software’ often records what was used to edit the file.  In this case it appears to be the built-in phone app. After I added my own annotation, the file date was updated, but exif dates were preserved.

Clicking on the ‘Show in Google Maps’ button in Irfanview takes me to the GPS co-ordinates at Golf Course Road in Wanaka and plops a marker on the lawn outside a building with arched windows.  On the street map image, dated 2009, I can make out the sign which says ‘Little Italy‘, which is at 76B Golf Course Road.  There is also a marker for ‘Bistro Gentil‘ at 76A Golf Course Road.  The tables and windows in photos on Bistro’s website are a good match to the photo.  Stephen and Joan have confirmed that they dined at Bistro Gentil. 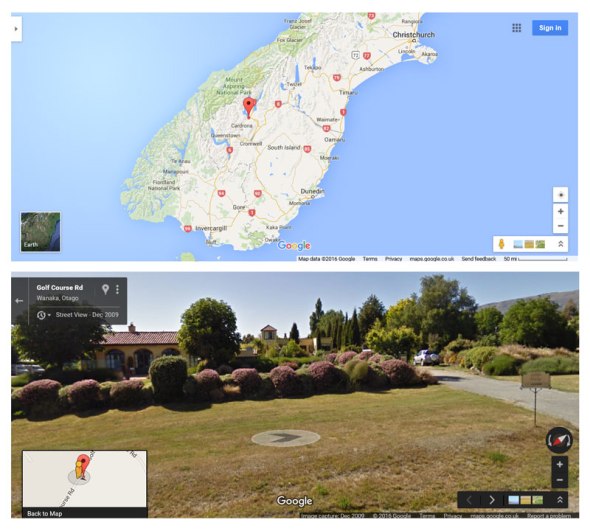 Although the exif data contains a time and place, there is more that I want to record in the digital image file.  I want to include:

User added data is supported by IPTC Photo Metadata standard.  I used the keyword field for a name tag, the Description (or Caption) field for the email contents.  There are other fields available, but not all software implements them properly.  These two fields are widely supported by image software and operating systems, making the tags and description searchable.

The description I have added contains private email addresses, which I do not want to share publically.  Stephen and Joan are happy to share the photo and have given me permission, but aren’t likely to thank me if I release email addresses that could potentially be spammed.  They aren’t concerned about the world knowing where they had dinner one evening during their holiday.  Sometimes location is much more sensitive.  Photos taken at your home with a GPS enabled phone could be more revealing than you would wish.

So, how best do I ensure that I share appropriately?  Anything published on this blog could be shared on social media, quite likely by me.  Facebook reputedly strips all exif data from photos to avoid privacy issues, but discards copyright data in the process.  There doesn’t seems to be any easy method to remove selected exif data, and even if there was, how long would it take to edit each photo’s metadata?

Next time you receive a digital family photo, will you be looking at it more closely?

A century ago, on 6 November 1914, Richard Preece, the headmaster of Hitcham School wrote in the school log:

“19 recruits started off from the school gate to join the 5th Suffolk Regiment at Bury St Edmunds. They went away in three motors. A good many parishioners mustered outside and the children gave them a hearty send off. All but one are old scholars.”

Local historian David Turner reported that a photograph of the 19 volunteers with the school master was taken outside the school [1], and confirmed that photograph in my possession is a copy of it [2].

It is a lovely story, but can the claim that this photograph was taken to commemorate the event be corroborated?

The 1914 photo closely fits the area indicated by the red frame. The doorway is a distinctive shape and the level of the guttering relative to the door is the same in both photos. Although the building is now rendered, a patch of plaster had come off revealing the brickwork underneath, so the construction materials and architectural details match up. The 1872 date stone suggests the building was standing in 1914.

The recruits were initially assigned to the 2/5 Suffolk Regiment for training and re-assigned to other regiments later. These 19 recruits were only a proportion of Hitcham men who served during World War I.

Do you recognise any of the other recruits? Did your ancestor volunteer on the same date? I would really like to identify all 19, so please do let me know.

Thank you to the 21 people who responded to Photograph Identity Questions 4, 5 & 6. A couple of people did not answer all three questions, so each ended up with 20 answers as follows:

In this series, I have now asked ‘Is this the same person?’ for 6 pairs of faces. Photo pair 1 was a control case where I knew the answer was ‘No’. Photo pairs 2 to 6 are all about comparing people in the group photo below with other photos in the same album.

To recap all 6 results:

Three of the photo pairs were included in a project I undertook in 2010 for the Genealogical Studies postgraduate program at the University of Strathclyde. The methods were a little different as most respondents gave their answers offline and they were asked to give ‘instant’ answers rather than try to consciously analyse the photo pairs. In the Strathclyde study, 4 of the 5 control face pairs known to be the same person scored 70% or more ‘Yes’ votes, but only 1 of 4 the control face pairs known to be different people scored over 70% of ‘No’ votes. So I thought responses to face pairs of unknown identity with a substantial majority of ‘Yes’ votes, especially those over 80%, were likely the same people. I hoped for consistent results for the 3 pairs repeated in this series. Photo pair 2 delivered the same result, but photo pairs 1 and 5 did not.

Comments from respondents suggest that they spent time consciously analysing the photo pairs. If undecided did you vote ‘No’? Did you become less sure the longer you tried to analyse the photos? Are these potential reasons for the preponderance of ‘No’ votes? Could the 60-70% middle ground ‘No’ votes really indicate uncertainty? I welcome comments on these questions.

I admit that I hoped that pairs 2 – 6 would have decisive ‘Yes’ answers to support the conclusions summarised in Cartes de Visite album links to the Stanley family and Earls of Derby.