Having catalogued and scanned the Bill Lawrence collection, I now have a good idea of the contents, and loads of questions.  So the next step is to analyse the contents further and decide which questions to investigate first.

An overview of the main events and themes revealed by the documents helps me identify and narrow down to priority questions.  Main events documented include:

Both of Bill’s parents were born in England, but married in Australia. There is nothing in the collection that documents their emigration.  For me, this is the big question, or rather series of questions. 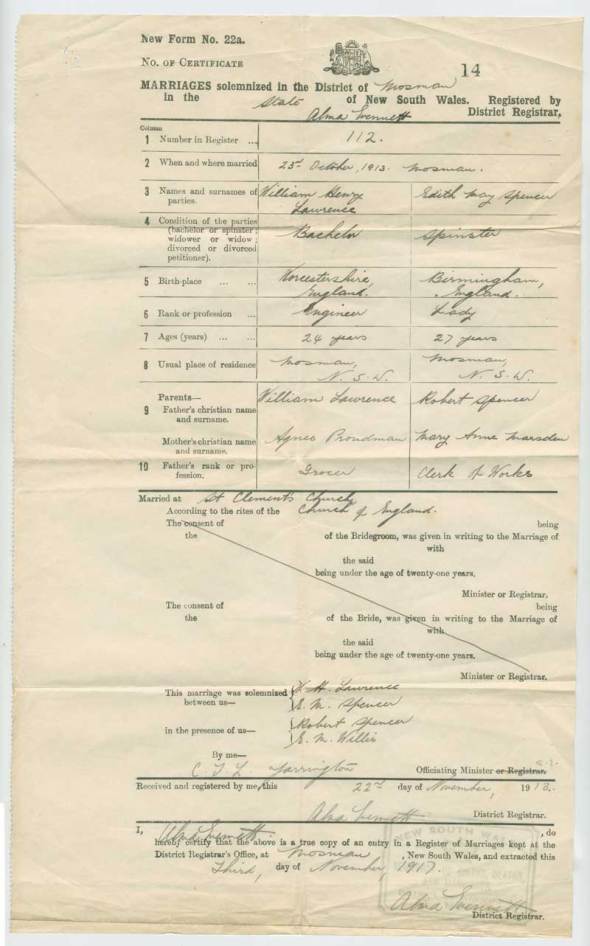 Another question is what the enigmatic 1919 telegram from Bill’s father was about.  I wonder if it is connected with what Bill’s father did in the First World War, of which there is also no record in this collection. 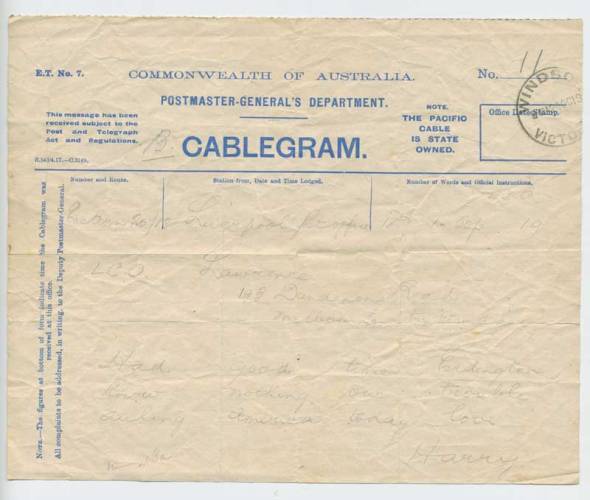 The lack of documents after Bill’s marriage makes me wonder why they aren’t included.

The rest of the collection reveals a somewhat different story than I had been told.  Bill’s maternal grandparents spent considerably more time in Australia than is suggested by the received narrative that they went to collect their widowed daughter and grandson.

What questions do other family members have? 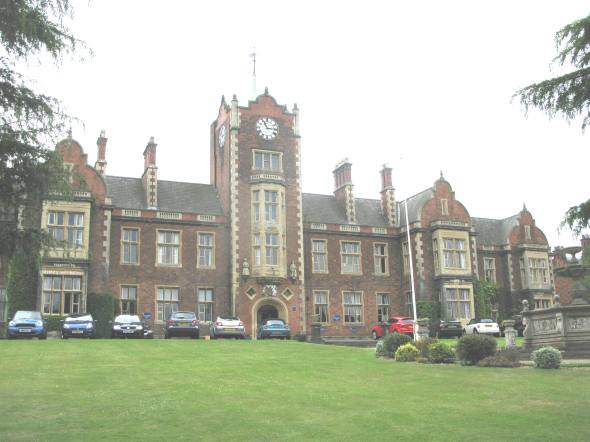 Family gatherings are often where family history is shared.  This New Years Eve (30 December 2015) was no exception.  My Aunt, Gill, handed me a folder of documents.  She had acquired them from her cousin, Penny.  The documents belonged to William Henry Lawrence who died in 2009 aged 94, leaving them to his niece, Penny.  William, or Bill as he was known to family, was the husband of Gwendoline Brown, my 1st cousin once removed.

All the documents share a common origin, and together, tell a story about Bill’s life.  So they make a natural collection or, in archival terms, fond.  I am always excited when presented with original documents from personal collections because these are the kind of treasures that don’t find a home in an official archive.  In the early years of my family history obsession I would have eagerly shuffled the contents of the folder as I examined them.  Experience of using archives has taught me to keep collections in the order presented.  As I started to go through the pile, carefully preserving the order, my other aunt piped up, “They aren’t in any order.  We had them all over the table when Penny showed them to us.”  That was time to bite my tongue!  It is useful to know that the photographs tucked into the passport is about what my living relatives thought, not how Bill arranged them.

Later, at home with a table clear of New Year Chinese takeaway & fish and chips, I set about cataloguing the collection.  First, I recorded the origin of the collection and asked Penny if she was happy for me to use the documents on this blog.  It is important to establish whether there are any concerns that might need addressing.  That covers the first stage (accession) of archival cataloguing described in Provenance of a Personal Collection – Archival Accession, Arrangement and Description.

The next step is to gather related items and put them into an order. The arrangement process can be summarised in 3 steps:

This video from York Libraries and Archives gives guidance for community archives.

As you can see from the video, the same collection was grouped differently by the participants, but both were equally valid.  An analogy is the ways in which you could arrange a pack of cards.  If you want to check the pack is complete, you could sort by suit, then by value.  If you were playing rummy you would group runs in suits, and triples of matching value. For cribbage combinations that add up to 15, and pairs are important.  It is easy to return a pack of cards to its original order because the information in on the cards.  Historical documents are rarely so amenable.

Some people advocate organising your genealogical documents according to the people they relate to, working through your family tree.  This approach is problematic, because it fails to preserve provenance information, does not accommodate documents that don’t relate to individuals and is vulnerable to changes in conclusions that are an inevitable part of genealogical research.  Bill’s collection could be split between himself, his parents, grandparents, and a ship.  That would lose the information that these documents were Bill’s own, and that he kept them for many years.  It is possible to record that information separately, but I think that is doing things the hard way.  Going back to the cards analogy, the less shuffling the easier it is to see and understand what you have.

You may recall that the collection had been shuffled, so my task was to re-create a logical order.  I settled on 5 categories (series), some of which were sub-divided (files):

Within each category, I sorted the documents by date order and numbered them accordingly.  Most of the photographs are undated.  I grouped them by size, paper type, markings on back and content, so photos processed at the same time should be together.  There is still work to do on the photos, so I am not going to assign sub-divisions within them.

To stop shuffling when I start working with this collection, I put the photos in a slip in album and the documents in a display book with plastic pockets.  This is cheap and readily available storage, which is adequate for the short term.  In the longer term, I may invest in proper archival storage.

The next step is detailed description of both groups and items.  I have basic description from the first list of items that could be used as a title for each item.  Essential information for most descriptions include: creator, date, title (what is it), description (more details), extent (e.g. how many pages in a leaflet, how many items in a series), level (collection, series or item), reference.

So, the first few catalogue entries look like this:

After arranging the collection, I am able to find documents and see how they relate to one another.  As I add more detailed description, the catalogue becomes an even more valuable resource.  More  information than typically appears in citations is included.

Would you like software that helps you build your own genealogy archive catalogue?