Women in the Property Records of Clent Manor

The 22nd in the 50 Marriage Mondays series concerns my 6th great grandparents.

The parish register entry[1] appears under the heading Ladyday 1714.  Ladyday was the 25th March, so the February following was 1715 on the Gregorian calendar in use today.  Let’s resist celebrating the tri-centenary of this marriage until 2015.   The entry woefully is short on detail:

No father’s names, occupations, witnesses, or the other information we expect on more recent marriage records.   Fortunately, both the Raybould and Pearman families feature in the property records of Clent Manor.  Property transactions were recorded in the manorial court books and the new owner, called a copyholder, was given a copy of the entry.  The court official who administered proceeding on behalf of the Lord of the manor was the steward.  Clent’s stewards compiled summaries of title for each collection of land parcels (called a copy), which includes the year, the person who disposed of land (by death or surrender), the person who acquired land (admitted as a Tenant), and the relationship between them.  Copy no 5 shows the typical primogenitor inheritance pattern in the Raybould family[2].  Copy no 35 shows property passed through female hands as the result of John Pearman’s will[3], and provides evidence that Mary Pearman married a Raybould.

Notice that each date of death matches the property admittance of the heir.  Now compare the two younger John Rayboulds on both family charts.  The matching deaths and admittances is strong evidence that the son of Mary Pearman is the same person as the son of the John Raybould who died in 1746, and likewise for the grandson.  Two people sharing a surname and eldest son is strong evidence indirect of a marriage.

The steward’s summary gives the essentials of who owned land when.  The original court books give greater detail, for example:[4]

Now, let’s pull the evidence together: 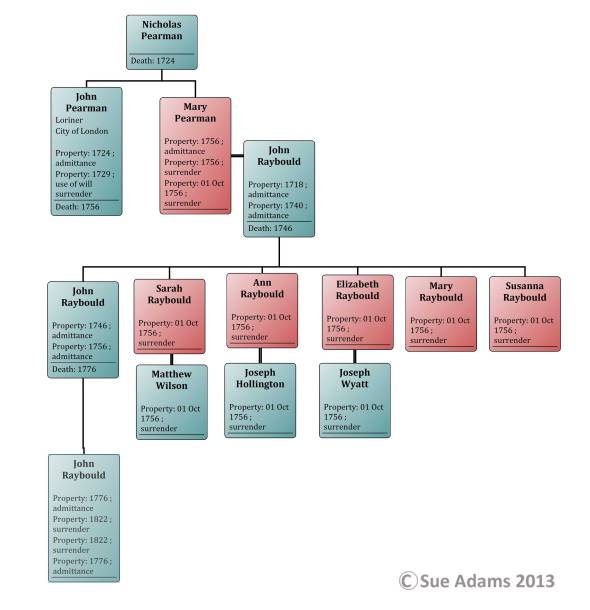 Did you think women could not own property and therefore do not feature in property records?

The most informative manorial court property entries often involve women because of laws in force at the time.  In a nutshell:

John Pearman registered the existence his will in the manorial court in 1729.  At that time, he could expect bequests to his sister Mary would pass to her husband John Raybould, then still alive, and then to his nephew John Raybould. However, by 1756 Mary was widowed so she inherited the property and was admitted tenant[5].  John Pearman gave his nieces a stake in the property by entailing his estate.  Under circumstances laid out in the will, they had the right to become the owners.  The husbands of the three married nieces had rights through their wives.  Consent of all parties was required for the property to be transferred free from all claims.  Although the married women did not stand to become owners, they were “secretly examined apart from their husbands” to give their consent.  Clearly, the family decided to avoid the complications that could arise from entailment and opted to transfer absolute ownership “in fee simple” to John Raybould, the eldest son.

Back to Family Folk Research Services

Having recently completed the Postgraduate Diploma in Genealogical Studies with the University of Strathclyde, Glasgow, Scotland, I have been looking around for further educational opportunities.

As my diploma dissertation was a study of manorial land records between 1712 and 1927, of Clent Manor, Worcestershire, England, the “Advanced Research Tools: Land Records” track presented by Salt Lake Institute of Genealogy (SLIG) 2012 peaked my interest.  The course runs from 23-27 January 2012.

Although my study focused on land inheritance, I had originally intended presenting results by mapping land holdings belonging to individuals or families.  However, faced with vague property descriptions, I realised this was more difficult than I had anticipated.  Of the copyholdings bought, sold or inherited by the Waldron family of the Fieldhouse, I could locate less than half.  Below is the map that I did not include in my dissertation because of these difficulties. 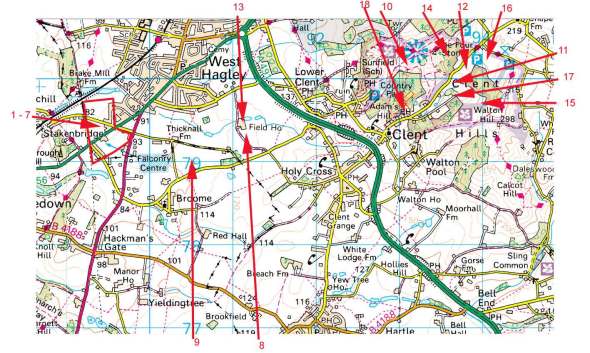 The Fieldhouse itself was easy (no 13), it is marked on current maps and the listed building records confirm that the house was built in the 1750s.  Some fields that were enclosed and first granted by the Lord in 1788 were described well enough for me to work out their location relative to roads and adjoining property (nos 1-7).   Descriptions referring to ancient field names that so not appear on any maps are more difficult, but I managed to find an archaeological report that gave approximate locations for a few names like Kitchen Meadow, Long Meadow and Wallfields.  So I could approximate the locations of land (the rest of the nos on the map) with descriptions like the following example:

Winden Field is a place name that occurs frequently in the manorial court records, but I do not know where it was.  It is thought to be the name of one of the open fields dating back to the medieval farming system.

Occasionally, land descriptions refer to the tithe map.  In Clent this dates to 1838 and records the landowners who were liable to pay tithes, a tax collected by the church which supported the clergy.  None of the land owned by my study family is directly linked to the tithe map in the court rolls, but it may be still possible to correlate the two.

So what does all this stuff about English land records have to do with and course on American land records?  Well the problems are similar and the SLIG course offers some tools applicable to land records anywhere.  The Strathclyde program is biased toward Scottish research and records (it is a Scottish university!), which some think a disadvantage for English based researchers.  However, I benefited from seeing how English and Scottish records differ and the comparison has deepened my understanding making me a better researcher.  American records will be different again, and that is interesting.

As I am based in England the main expense of attending SLIG is the airfare.  However, as RootsTech (2-4 February 2012) and APG Professional Management Conference (1 February 2012), follow a few days later, I could attend all three.  Now the airfare seems a little less extravagant!