A century ago, on 6 November 1914, Richard Preece, the headmaster of Hitcham School wrote in the school log:

“19 recruits started off from the school gate to join the 5th Suffolk Regiment at Bury St Edmunds. They went away in three motors. A good many parishioners mustered outside and the children gave them a hearty send off. All but one are old scholars.”

Local historian David Turner reported that a photograph of the 19 volunteers with the school master was taken outside the school [1], and confirmed that photograph in my possession is a copy of it [2].

It is a lovely story, but can the claim that this photograph was taken to commemorate the event be corroborated?

The 1914 photo closely fits the area indicated by the red frame. The doorway is a distinctive shape and the level of the guttering relative to the door is the same in both photos. Although the building is now rendered, a patch of plaster had come off revealing the brickwork underneath, so the construction materials and architectural details match up. The 1872 date stone suggests the building was standing in 1914. 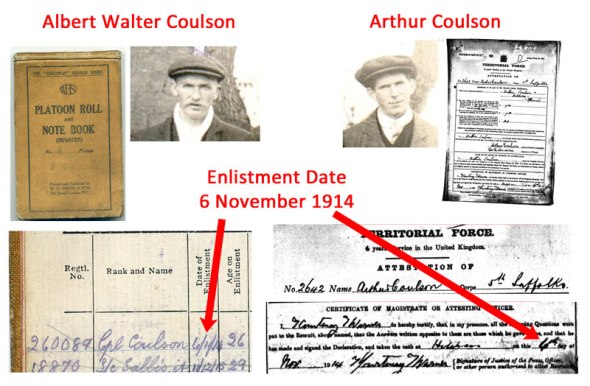 The recruits were initially assigned to the 2/5 Suffolk Regiment for training and re-assigned to other regiments later. These 19 recruits were only a proportion of Hitcham men who served during World War I.

Do you recognise any of the other recruits? Did your ancestor volunteer on the same date? I would really like to identify all 19, so please do let me know.

Remembrance of an unidentified soldier

This postcard sized photograph is part of a collection of First World War photographs that were inherited by Raymond Walter Coulson (1922-1997).  His father, Albert Walter Coulson (1888-1956), served with the Suffolk and Gloucestershire regiments.  The cap badge looks like that of the Suffolk regiment.  Although this young soldier bears a resemblance to Albert, this photo has a date stamped on the back, the 6 Feb 1917.  This young man looks to be in his late teens or early twenties, so he is clearly too young to be Albert, who by then was a seasoned soldier approaching the age of 30.  On close inspection I can make out the photographers embossed details on the bottom right corner:

According to the Photo Sleuth, Frederick Joseph Seaman operated a photography studio in Doncaster between 1915-1926.

So, there are some clues, which together with details of his uniform may lead to this soldier’s identification.  In the meantime, I’ll remember him as an unidentified soldier.

Non-conformist Marriage by an Authorised Person

In previous posts in the 50 Marriage Mondays series, I have discussed the effect of laws on the process of marriage and the documents produced.  To recapitulate briefly, after Hardwicke’s Act of 1753, all forms of marriage in English law required:

Over time the dominance of the established Church of England was eroded and marriage law was amended.  The introduction of civil marriage by the Marriage Act 1836 brought in the procedures I discussed in ‘Civil Marriage and Witness Identification’.  Non-conformists could then choose either a Church of England or civil marriage, but their own religious ceremony still had no legal standing.  Examples of Baptist’s choices were included in ‘Religious Affiliation and Who’s the mom?’ and ‘Baptist Marriage and Birth records’.

This marriage was performed in a non-conformist Congregationalist church:

Marriage certificate – Davies, David Llewelyn & Coulson, Winifred Rose.
Annotations in red show the wording that tells us this marriage was conducted by an Authorised Person

Notice that the official who signed the marriage register was neither a registrar nor an Anglican clergyman, but an Authorised Person.

What is an Authorised Person?

The Marriage Act 1898 was ‘An Act to amend the Law relating to the Attendance of Registrars at Marriages in Nonconformist Places of Worship’.  It allowed the governing body of licensed venues, such as non-conformist churches, to appoint an ‘authorised person’ with approval and supervision of the registrars.  Such a person was entrusted with performing the legal checks prior to a marriage, recording marriages in the venue’s register, safe-keeping of the registers and official forms, making returns to the General Register Office and associated paperwork.  The non-conformist minister was typically an obvious candidate for appointment as Authorised Person, but it could also be some other respected member of the church.  So, Perrin James Spooner was probably a Congregational minister.

The Kingstanding Congregational Church was a short distance from the bride’s home at 17 Twickenham Road, Erdington.  The church was demolished, but there is a photograph of it on Voices of Kingstanding, a treasure trove of oral and local history.