Cousins and a Golden Wedding Anniversary

This episode of the 50 Marriage Mondays series features a golden wedding anniversary.  The couple were:

This is a photocopy of the wedding photograph.  Apart from the couple, seated in the centre, I am sure about the identity of a few of the guests.  Seated on the far right is Mary Louisa Wilson, Ethel’s eldest sister.  The tiny woman standing behind Ethel is her mother, Emma Louis Wilson, nee Simms.

I think the slightly disreputable chap standing behind George is Ethel’s father, Thomas Wilson.  As George was a marine engineer, the uniformed man might be a colleague, perhaps in the merchant navy.  The four men to the right of the uniformed man resemble other photos labelled by various relatives as Ethel’s brothers, but I am not sure which brother is which.

Although the marriage certificate does not indicate George’s father was deceased, George Frederick Simms’ death was registered in the January-March quarter of 1897 (Wandsworth district, Vol. 1d, p. 370), and the 1901 census records Emily Simms (nee Armstrong) as a widow.

The couple were first cousins:

In 1911, George’s two cousins, George Harry Wilson and Matthew Lancelot Wilson, who were also Ethel’s brothers, lived in the couple’s household.  On 3 August 1954, George and Ethel celebrated their 50th wedding anniversary which is commemorated by this photo: 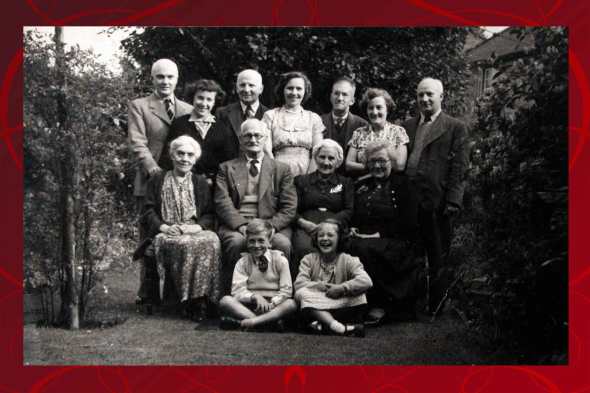 Again, apart from George and Ethel seated centrally, only some party guests have been identified with confidence.  Seated either side of George and Ethel are the wives of the two cousins/brothers that who were part of the household in 1911.  On the left is Emily Olive Pee, wife of Matthew Lancelot Wilson, and on the right is Elizabeth Johnson, wife of George Harry Wilson.

Standing behind Elizabeth is Muriel Thompson (nee Simms), daughter of George and Ethel, and behind Emily is Muriel’s daughter, Patricia Muriel Thompson, aged 16.  Muriel’s other daughter, aged 9, is the laughing girl seated on the ground.  The boy next to her looks about the same age, so he might be John Simms, son of John Frederick Simms.

The men are more problematic, not least because the general lack of hair makes it difficult to judge ages.  I think the man of the left is Gordon Shirley Wilson, son of Emily Pee.  It has been suggested that the men either side of Muriel are her brothers, Herbert (aged 43) on the left and John Frederick (aged 30) on the right.  However, the man on the right looks older than 30 to me, so I think he may be Muriel’s husband, William Ross Thompson, aged 46.  The man directly behind George looks older than the other standing men, so possible candidates include Ethel’s brothers George Harry Wilson, aged 63 and Matthew Lancelot Wilson, aged 58.

If you can confirm my tentative identifications or know who the other people were, please leave a comment.