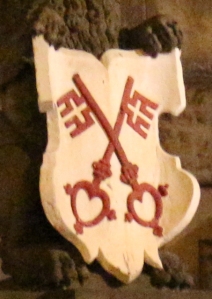 The shield of Leiden’s municipal coat of arms. The crossed keys are the symbol of St Peter, patron saint of the city to whom the oldest church was consecrated in 1121.

On 7 October 2014, a group of genealogy technologists gathered in Leiden, The Netherlands, for the first Gaenovium conference. Although small with around 25 delegates, it was certainly forward looking and shows promise of things to come. It seems fitting that open data and open standards for genealogy have been expounded in the city whose symbol is a pair of crossed keys.

The principles promoted by open movements such as Open Definition have found support in the academic and cultural domains. Gaenovium attendees included representatives of universities and commercial digitisation and archival management companies, which all exploit open data to their advantage. Independent developers, genealogy organisations from the Netherlands, Nederlandse Genealogie Vereniging, and Centraal Bureau voor Genealogie, and Verein fur Computer-genealogie e.V. from Germany, accounted for most other delegates.

Generally historical data were not collected for the purpose of genealogy. Genealogists are masters of reusing and combining data, but sometimes forget that the data may also be used for other kinds of research. Marijn Schraagen of Leiden University spoke about algorithms for name matching, which has applicability beyond genealogy. He compared new and established algorithms for efficient use of computing resources and scalability as well as functional capability. He commented that a new algorithm may not be better at matching names, but might do so more quickly. Over dinner, an attendee from Utrech University described using compiled genealogies to investigate human life spans.

Digitisation and archive management companies Picturae, Mindbus, and DE REE archiefsystemen were represented. Dutch cadastral maps on HISGIS, WieWasWie and Archieven.nl are examples of their collaborative work that are well worth exploring. I am guilty of a common sin committed by native English speakers. I often pass over resources that are not in English, and just look what I missed!

Google translate renders the sign as,
“prohibitions against mopeds off fix to the fence , they will be removed”

Open data advocate, Bob Coret convincingly demonstrated Open Archives, a platform that combines data from several Dutch heritage institutions.   Use of the Open Archives Initiative Protocol for Metadata Harvesting (OAI-PMH) in a genealogical context highlights the connection between archives and genealogy. The majority of genealogical sources are original documents housed in an archive, or some derivative such as microfilm or digital image.

Michel Brinckman presented a detailed view of the Archives-to-Archive data model behind WieWasWie and Open Archives. Timo Kracke showed some of the complexities of place name data.

A discussion of genealogy data standards would be incomplete without mention of GEDCOM. Louis Kessler’s  Reading wrong GEDCOM right set out pragmatic best practices for overcoming an imperfect and poorly implemented standard.

So, how did the big four genealogy companies appear at Gaenovium? FamilySearch were roundly criticised for their failure to engage and co-operate with others in standards development. Although I appreciate the records they make available, I find myself unable to defend them. They sent no representative, so remain disengaged. Ancestry also did not attend, and were not even mentioned. Even though I disagreed with Phil Moir of D C Thompson Family History during the panel discussion, I appreciated his presence. I hope the feedback helps the company to serve its customers better. My Heritage demonstrated their engagement with innovation the genealogy industry by sponsoring the conference. In addition, they sent two delegates who actively showed interest in the opinions of others.

Gaenovium delegates leaving The Pavilion. “Follow me to dinner” said the genial host, the man with the bicycle (aka. Tamura Jones) 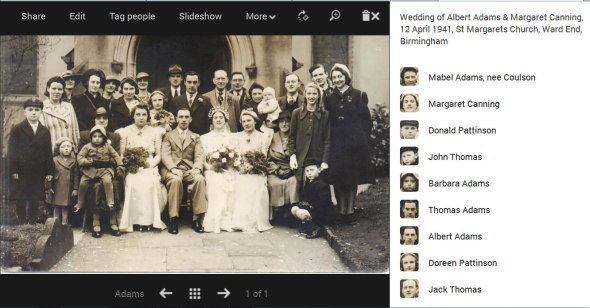