The written conclusion, the answer to a particular single genealogical question, is like a delicious soup. Soup, when skilfully prepared from carefully selected ingredients, develops just the right flavour for the diner. Not everyone likes the same flavours, and some need a simple and digestible meal. Chefs tell us that fresh, quality ingredients make the best soup. 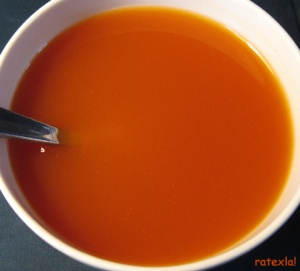 A proof statement is like a simple soup, suitable as a starter (needs context), made from just a few raw ingredients (original records, primary information) that have harmonious flavours (no conflicting evidence). Preparation (analysis and correlation) is straight forward.

A proof summary is like a more substantial soup, suitable as a light meal (can stand alone), typically made from a range of ingredients. It still contains raw ingredients, but might contain some preserved ingredients (derivative records, secondary information) when fresh are unavailable. Flavours may compete, so a balance is needed (conflict resolution). Preparation takes longer than a simple soup and may involve two or more stages (documented facts).

A proof argument is like a filling soup that is a meal by itself. It contains many ingredients, including some that need extensive preparation or long cooking (questions of identity and substantially conflicting evidence). Eventually the flavours blend into a rich complex that gives an initial impression, develops on the tongue and leaves a distinct aftertaste. Preparation may include test tasting (hypothesis), adding new flavours (building blocks), and contrasting flavours (if-then syllogisms).

How did the first soup you made taste? Writing a genealogical conclusion gets easier with practice, just like making soup.

During this week’s Hangout-on-air, I publically criticised Evidence Explained, widely regarded as an essential reference to genealogical citation. In particular, I find the examples for census and civil registration records in the United Kingdom confusing.

In this post I will examine one census example, a first reference note on page 304:

The original of this record is held at The National Archives, Kew, and its catalogue entries are arranged in several levels :

There is extensive documentation of the parliamentary Acts, instructions, forms and resulting publications at Histpop Online Historical Population Reports.  The RG 10 subseries and sub-subseries follow the order of registration districts in the Registrar General’s Annual Reports. Sub-districts were further divided into Enumeration Districts, an area that could be covered by one enumerator. The enumerator collected household schedules (which generally were not preserved) and used them to fill in the Census Enumerators Books (CEB). The census record we have here is a page from a CEB. There could be one or more CEBs for each Enumeration District, and several EDs for each Registration sub-district.

Before the CEBs were microfilmed, each sheet of paper or folio was stamped on the top right corner of the front side, starting with no 1 on the first page of the first CEB and continuing the sequence through subsequent CEBs. Consequently, the combination of folio number and page number uniquely identifies each page within a sub-district.

To cite the original page following Thomas Jones “who; what; when; where in; where is.” format:

The thing that is missing from the above is an archival reference, also known as a call number. The reference elements are included, but are scattered. The National Archives type of reference is a well established convention that is widely understood. If you were permitted access to the original, you would quote the reference RG 10/571 for the bundle of CEBs and RG 10/571/27/3 for the page, because that reflects the current archival arrangement and makes it easy for archive staff to retrieve.

Now let’s take a look at the Ancestry version of this record. Ancestry often re-arranges records because the website deals with digital images rather that the original thing. Treating each image as a separate ‘thing’ within a series is sensible because each image is a separate file. This is different from the original CEB or bundle of CEBs that comprise RG 10/571. Ancestry’s card catalogue splits the census by year and country into separate collections. Within a collection, the breadcrumb trail shown above the image reveals the arrangement, the last element is the image number at the bottom of the image. A complication for this example is that the digital image was derived from microfilm, of which I have no details.

Citation of the Ancestry copy requires a layered citation, which gives details of both the digital image and original:

I much prefer this citation to the Evidence Explained version. With census records I more interested in “what” rather than “who”, so I might change the order of citation elements or drop the creator. The title in the form ‘Census, 1871, England & Wales, CEB’ would make all my census records appear together in a source list. I could omit the first ‘Ancestry’ and abbreviate common terms. I did not give the full URL that takes you directly to the record because that could change, and it is rather long.

How would you cite this record?

I have previously pondered citations. What do you make of these examples:
Copies of Copies, Citation and Source Evaluation with FamilySearch
Citation and Verification or ‘Where the hell did I get this from?’

A reasonably exhaustive search is complete when you have sufficient evidence to draw a conclusion.  That may be just two independent sources.  It certainly does not mean finding every record in existence.  Consider:

Figure out which sources are most likely to yield information pertinent to the research question.  To do that you need to educate yourself about the time, place and record types.  Bibliographic and archival catalogues are the keys that unlock knowledge.

Archive versus Library: FamilySearch is neither

I asked fellow panellist and archivist Laura Cosgrove Lorenzana to explain the differences between libraries and archives, because it helps us make best use of them.  She supplied a helpful article from the Society of American Archivists that sums it up nicely.  In summary:

The Family History Library (FHL) in Salt Lake City, Utah, USA does not fit either the library or archive categories, and is a rather unique institution.  It is a microfilm library.  The microfilms contain copies of archival materials, transcripts, indexes and authored works.  Each microfilm is identified by a number, which is needed to access information of its contents in the catalogue.

Photographic technology of the 20th century has shaped the FHL holdings.  Traditional chemically processed film came in a linear strip forcing records to be copied in a fixed sequence.  The costs were relatively high, an incentive to use all of each film roll, breaking away from the archival arrangement of records in the process.

So, the Family History Library is a strange hybrid based on old technology, and its offspring, the International Genealogical Index (IGI, on microfilm and later online) and FamilySearch databases reflect that history.  The ease of access of these resources is commendable, but it has influenced the thinking of many genealogists and family historians spreading widespread misconceptions of research processes.

The processes leading to the microfilm and online resources relevant to the birth of an ancestor born in the early 1800s in England might look like this:

Note that the FHL catalogue records film details, with varying quality of provenance information.  Note also only some microfilms have been indexed and incorporated into the FamilySearch databases.

An archival catalogue is the most important product of the processes performed by archivists in managing the collections in their care.  At risk of making Myrt cry again, I repeat my message from the hangout-on-air:

In the course of our research, we each build a personal collection.  So, I recommend building a catalogue as explained in Provenance of a Personal Collection – Archival Accession, Arrangement and Description.  The Community Archives and Heritage Group gives helpful guidance for small archives.  Genealogists need a user-friendly cataloguing tool that integrates with all the other software we use.

Recent acquisitions that have not yet been catalogued, catalogues that are not on-line, or not computerised all pose challenges to finding sources.  Archival catalogues describe hierarchical groups of records, but often are not complete down the level of individual items.  A competent genealogist takes account of these difficulties and records what was found in the catalogues consulted.

Tools for finding information contained in sources, called finding aids by archivists, include indexes, and databases.

Thorough research is accomplished by targeting the sources most likely to contain relevant information. Then, search within each source for the information. Have you got that?

Yet all major genealogy websites default search covers all sources.  This numpty scattergun approach serves no-one well and encourages poor habits. In Kerry Scott’s nutrition analogy, it leads to a diet of poptarts rather than a healthy balance, resulting in a rickety family tree.

Even carefully compiled indexes contain errors.  It is fairly easy to spot index data that is clearly inaccurate such as gobbledygook rendered by optical character recognition (OCR).  No search algorithm or fancy programming can overcome such poor quality data.  More subtle errors are harder to detect.  Before we can hold vendors to account, we need to know what error rate renders an index unfit for the purpose of a reasonably exhaustive search.

A competent genealogist takes steps to overcome the quality issues of indexes, databases and other finding aids.

Genealogy and family history research depends so much on archival material, even if it is accessed in derivative forms.  So, take time to understand the work of archivists.