An engagement is generally a much more informal event than the marriage that may follow.   A couple may become engaged long before any legal formal notice is given in the form of banns or civil alternative.  I know about the marriage of my grand uncle and grand aunt from their marriage certificate:

Some couples announced their plan to marry to their social circle through a newspaper personal column or other equivalent of today’s social media.  Some held a celebratory party.  Others simply started preparing for their wedding with no announcement or celebration.  The abiding symbol of an engagement is the engagement ring.  Thanks to Percy and Evelyn’s daughter, I have a document that records the purchase of Evelyn’s engagement ring.

The receipt, clearly torn along the perforation from a carbon duplicate book, is filled in by two people with different handwriting.  The first records:

The second hand records, some of it overwriting the 2 one penny revenue stamps:

I think the signature is Mr Nelson’s, who received payment, presumably from Percy.

It seems quite obvious that Nathan Brothers were jewellery manufacturers, but who was Mr Nelson?  The 1921 and 1932 editions of Kelly’s Directory of Birmingham confirm that Nathan Brothers were jewellery manufacturers based at 120 Vyse Street[1].  I did not find a Mr Nelson, but two businesses operated at the address given, 184 Warstone Lane: Joseph Wainwright, a manufacturing jeweller and Sechaud A. & Co., precious stone dealers[2].   Both Vyse Street and Warstone Lane are in Birmingham’s Jewellery Quarter.  The involvement of two businesses might indicate a custom-made ring.  I suspect Mr Nelson worked for Sechaud & Co. and that they supplied the diamond for the ring made by Nathan Brothers.

From this receipt, we can estimate that the couple became engaged about a year before the marriage.  What I do not know is whether Percy bought the ring before or after his proposal of marriage (assuming he did the traditional thing).  It would also be nice to add the story of Percy and Evelyn’s courtship, so dear relatives, what tales can you add?

Edward John Adams or Edward James Adams, featured in ‘Common Surname Trouble – Adams in Birmingham’, presented an identification challenge. This marriage appears to be his second. 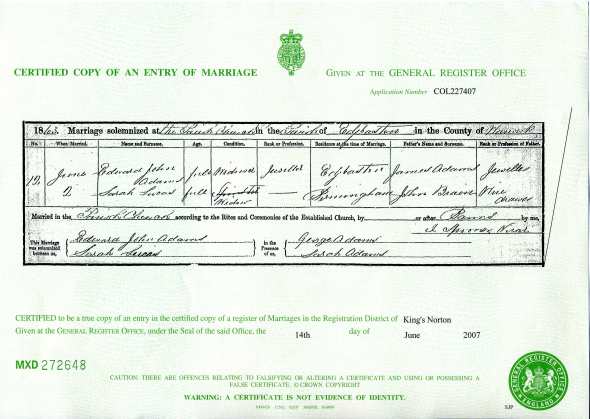 A recap of evidence found so far

Evidence from census, birth and marriage records suggest that Edward John Adams, started out working as a butcher in the 1840s, then became a jeweller and retired around 1870.  He was widowed before 1861, so was free to remarry.  He had a son, also named Edward, born ca 1837.

Another younger Edward J Adams or Edward James Adams worked as a jeweller from the 1870s and had diversified into watch and clock making by the 1890s.  The ages of this Edward indicate a birth date ca 1837, which is consistent with him being Edward John’s son.

The records that associate Edward senior with his second wife, Sarah, only give a middle initial J, leaving room for doubt about whether he is the same person the man who married Mary Foster in 1834.

Using Ancestry’s ‘UK, Midlands and Various UK Trade Directories, 1770-1941’ collection and bearing in mind the caveats discussed in ‘Picking up the Tailor’s Thread through Trade Directories’,  careers and residences of the two men are summarised as follows:

Entries for private residents, usually the more affluent and respectable people, do not give the exact street address.   Tyburn, Erdington is very close to Kingsbury Road, so I am reasonably sure that the resident Edward John Adams is the same person as the jeweller at Spring Villa on the 1881 census.  This census indicates that wife Sarah was born ca 1820 and the birthplace for both is recorded as Warwick, probably meaning the county, which is a bit vague.  Sarah appears on the 1851 census with her first husband James Lucas and son William, and as a widow on the 1861 census with William.  Sarah Lucas, nee Brain’s birth date, reported as ca 1820, matches the jeweller’s wife at Spring Villa.

Moving out of Birmingham’s Jewellery Quarter

The trade directory entries chart Edward John Adams’ jewellery business at Sand Pits and Kenion Street in the Jewellery Quarter and his retirement to the suburbs.  Edward James Adams expanded his business, occupying Jewellery Quarter premises in Spencer Street and St Paul’s Square as well as nearby city centre premises, whilst residing in Acock’s Green.

This all started with my confusion over the inconsistent naming of Thomas Adams’ father on his marriage certificate.  I am now convinced that the middle name James was an error.  I am also ready to conclude that Edward John Adams married twice.  The second marriage names his father as James Adams, a jeweller, an elusive piece of information.