In the previous two parts of this series, I transcribed a manorial court record of a property transaction, and extracted information from it.  So far, I have only been concerned with information contained within the court session and cases.  The next steps are to check names, dates, places and legal language; and to identify people, locations and interpret events.  This process draws on information from other sources.

I’ll start with checking place names and locate them on a map.  The court records contained 11 names of places that referred to 7 specific locations, but stated the type of feature or jurisdiction (e.g. county, parish, dwelling house) in 5 instances.

A gazetteer (a geographic index, dictionary or encyclopaedia) is an ideal reference for validating place names.  A Vision of Britain is a key resource that includes historical gazetteers, boundary maps of many (but not all) jurisdictions, and tracks the history of jurisdictions.  It draws on two gazetteers, John Bartholomew’s Gazetteer of the British Isles (1887) and John Marius Wilson’s Imperial Gazetteer of England and Wales (1870-72).  The gazetteers include entries for 8 of the 11 place names, and the boundary maps include the parishes, district, and county.

In only one case, the Kings Arms, the place name refers to a specific point, a building.  Hamlets and townships were small settlements, and villages and towns were larger settlements, all with no defined boundary. Jurisdictions such as parish, manor, borough, district and county were defined, and with the exception of manors are mapped by A Vision of Britain.  Examples are the boundary maps for the county of Salop, also known as Shropshire and the parish of Claverley.  Where the court document specifies a jurisdiction, we can be sure of the geographic area covered.

I did not find Draycott in the historical gazetteers.  The Vision of Britain boundary maps allows viewing of 4 map layers from different times.  Draycott is marked on the modern map layers (OpenStreetMap and Great Britain 20th Century) between Aston and Heathton.  The same hamlet is named Draycote on the Great Britain 19th Century layer.

The court document referred to the manor of Claverley and Claverley as an unspecified entity.  The manor and parish were separate jurisdictions and usually did not cover the same geographical area.  There could be several manors within a parish and a manor could span the boundary of adjoining parishes.

Unlike parishes, manors have never been systematically mapped.  In the case of Claverley, I know of 3 documents that describe the manorial boundaries.  The earliest, dated 1509, is a metes and bounds survey written in Latin, which awaits transcription and translation (Shropshire Archives ref 5586/13/1).  The Manorial Documents Register includes two later boundary descriptions that I have not seen, dated 1615 and 1700-1900 (both at Shropshire Archives refs 1190/1/434 and 1190/1/433).

The court document references to the unspecified Claverley could be either the village or the parish.  Although the village doesn’t have clear boundaries, I think it does all lie within the parish from my interpretation of the maps.

Is there anyone who did not think ‘pub’ when you saw this name?  If not, I would guess you are not very familiar with Britain.

However, the court document explicitly refers to the venue as a dwelling house, a private residence, not a public house, a drinking establishment.  There is a pub called the Kings Arms in Claverley, but is this the same building?  A virtual wander in Google maps shows an historic looking building almost opposite the church.  The satellite view shows the pub is a large establishment comprised of several buildings joined together.

First we need to establish that the current building really is old enough to have been standing in 1844.  Fortunately, the Kings Arms is included in the English Heritage’s National Heritage List.  The listing describes the part a the building complex that includes the main entrance, and dates it to the 18th century.  So, yes it is old enough.

The Kings Arms name could have been applied to a different building in the past.  The tithe apportionments for Claverley, dated 1839, lists land owners and occupiers who were liable to pay tithes (a church tax) associated with property (Shropshire Archives ref 5586/5/19/1-3). Land parcel number 158 described as ‘Kings Arms Inn, Buildings & Yards’, was owned by William Smith and occupied by John Crowther senior.  I haven’t yet examined the tithe map to see where no. 158 is exactly.  I would not be at all surprised to find it is the location of the current pub.  When I have checked fourth source, the tithe map, as well as Google maps, listed buildings and tithe apportionments, I will be as sure as possible of the location of the Kings Arms, the building where the court baron was held.  That is not the same thing as my first thought of ‘pub’.

The court record is all about the transfer of a piece of land called Mill Hill and associated house and out buildings, totalling 3 acres, 1 rod and 16 perches, but so far we do not know where that was.  The tithe apportionments give the following information:

The area of these three land parcels adds up to 3 acres, 1 rod and 16 perches (40 perches to the rod, 4 rods to the acre). The area, description, owners and occupiers all match the property described in the court record, so I am sure land parcels 566, 588 and 589 on the tithe map will show me exactly where the property was.  Umm, my excuse for not consulting the tithe map on my last visit to Shropshire Archives is looking feeble.  I could swear archive time is accelerated, honest!

In the meantime, I’ll pull together what I can.  Mill Hill was in Heathton township, which is somewhere near Heathton House, a listed building.  The manor of Claverley extended to parts of Heathton township.  The tithe apportionments confirm John Wilson’s ownership and occupation of Aston Hall, but possibly not the current building which dates from mid-late 19th century.

I have marked the places as points on the map below, but this fails to convey that most place names refer to a larger, undefined area (e.g. township) or a jurisdiction.  It is useful to see the spatial relationships between places.  The approximate directions and distances of places found in the gazetteers are confirmed on the map.

Did you think looking at a modern map was all you needed to confirm where your ancestors lived and did things like attending a court?

Next time I will examine the people involved in the court proceedings.

Early in my genealogical career, I was given a copy of a hand-written narrative of the Wilson family, a snippet of which is shown here. 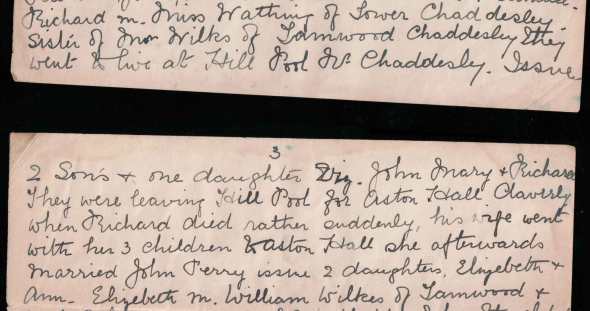 This is an intriguing story, but can I corroborate it?  Although rich in relationship and place details the narrative is short on dates.

A published transcript of the Claverley parish registers confirms Mary was a widowed before her 1805 marriage to John Perry and sets the events in a time frame.

On a visit to Claverley, I found this gravestone:

This confirms Mary had been married to a Wilson prior to her marriage to John Perry and sets the couple’s lifespans at 1765-1845 for Mary and 1762-1840 for John.  Mary’s 3 children by her first husband should all have been born before 1805.  Sadly the parts of the inscription that indicate her son, Richard Wilson’s age and death date have been worn away.  However, a place of residence is legible, Ackleton, a small hamlet, in the neighbouring parish of Worsfield.

Did a Richard Wilson born before 1805, live at Ackleton?  Yes, he did.  The 1841 and 1851 record farmer Richard Wilson, aged 40 (rounded down) and 53 respectively, with a wife, Mary and children.  Both of this couple share a place of birth on the 1851 census, but it is indistinct, so has been indexed as Chacesley, Worcestershire.  By 1861, this Mary had been widowed, and her place of birth is clearly Chaddesley Corbett.  So, Richard’s date of birth ca. 1798 and place of birth, Chaddesley, are consistent with the family story.

Did any of this Wilson family live at Aston Hall, Claverley?  Again the answer is yes.  John Wilson, born ca. 1793 at Chaddesley, Worcestershire was recorded at Aston Hall on the 1841, 1852 and 1861 censuses.  In case you were wondering, we met him in an earlier post Three Wilson-Wilson marriages and the Family History Library Experience. John died in 1862 and appointed nephew Richard Wilson of Ackleton as one of his executors.  Yes, you guessed it.  Richard junior was a son of Richard Wilson of Ackleton recorded on the 1851 and 1861 censuses.

Given that so much of this story can be corroborated, would you be tempted to believe the other details, such as Mary’s maiden name?

Citation and Verification or ‘Where the hell did I get this from?’

en starting out, every budding genealogist collects information, but fails to properly document where it came from.  We get excited with our discoveries and forget to make note of how we came by it.  So, several years later, the computer says:

In this case I did make a note of the source: Roger Thomas website (25 March 2005) with a URL (web site address).  Given that I accessed the website over 7 years ago, it might be a bit hopeful to expect the page still exists. Web pages are ephemeral things that disappear when the author or web master stops maintaining them.  Estimates of the average lifespan of a web page vary but generally suggest a few months.

Fortunately, Roger Thomas’ website does still exist, even though the URL I recorded leads to a different page to the one containing the marriage information now.

A better citation would include more information to maximise the chances of finding the relevant page even if the URL changed.  Michael Hait blogs regularly about genealogical citation from the American perspective at Planting the Seeds suggests thinking of the web page as a digital publication and treating it like citing a book chapter:

In this case the title “Roger Thomas’s Family History Research” and last updated only appears on the home page.  Unlike a book, web pages are effectively loose-leaf – they can be removed and added at the will of the author.  Publication dates of web pages are slippery things.  There is the original date of creation, and dates of each change thereafter, which are similar to multiple editions. So, it would be helpful if all the citation data appeared on the page to which it refers.  Of course, no web designer is going to add all that stuff because it would mess up the carefully crafted attractive page.

Umm, the website does not say where the information came from.  I should verify it from as original a source as possible.  Checking the civil registration index for marriages on FreeBMD is a good place to start, and confirms that a marriage took place between the right people in the Birmingham registration district sometime in the July-September quarter of 1901.  From here I could order a copy of the marriage certificate using the reference Vol  6d, page 359 from either the General Register Office (£9.25) or Birmingham Register Office (£10 plus £1 online processing fee or postage).

Another verification approach is to ask the website author, as they may have original documents.  In this case, the source is thought to be a now deceased member of the family (Bernard Sharrock), and Roger tells me some digging will follow and he is now much more careful to record where information came from than in the past when he “was always keen to move on to follow the line of research”(sound familiar?).  Mike, the other researcher behind the website also comments that he now has another project to document all the certificates he has.  Thanks to both Roger and Mike for their helpful responses.