Information gleaned from my maternal grand-parent’s marriage certificate indicates that Isabelle Jones first married a man with the surname Brown. 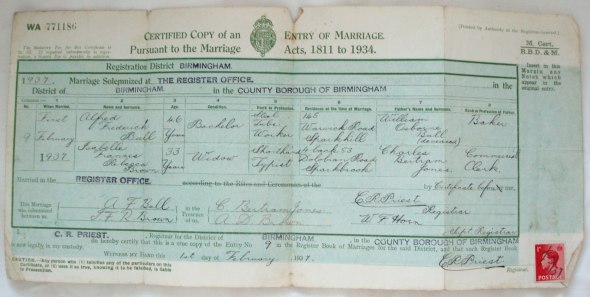 Further research supports the family story that Isabelle and Albert were introduced to one another by the relatives of Isabelle’s first husband, Charles Henry Brown.  To complicate matters Charles’ brother, George Brown married Alfred’s sister, Ann Dorothy Bull.  OK, there are too many relationships in that sentence, so I want to draw a chart that helps me visualise them.

Traditional genealogy charts and reports work from one individual and follow two basic patterns, ancestral and descendant.  Hourglass charts effectively stick an ancestral and descendant chart together at one individual.  Most genealogy programs feature all-in-one or extended charts.  Individuals with multiple relationships, appear more than once.  For example, Family Tree Maker 2010 produces this chart:

Notice that Alfred Frederick Bull and Charles Henry Brown appear twice and the chart has two separate ‘trees’.  I have colour coded the three families for clarity.  FTM 2010 allows manipulation of charts, so I fiddled around to try to represent this family on one joined up diagram with no crossed lines.

Although it seems clearer to me, it might not help anyone else.  It breaks the conventional placement of older generations at the top by turning the Browns upside down.  What do you think?  However, people such as Isabelle’s son-in-laws and grand-children will not fit. The glaring problem is the lack of scalability.

Perhaps it is time for a radical re-think.  In 2010, an alternative un-conventional approach was published in an academic paper[1].  Geneaquilts, the prototype software produces this:

It is not as intuitive as conventional genealogical charts, but it copes well with complex relationships and is scalable.  I used the highlighting feature to mark the same 3 families.

The GeneaQuilts website claims two genealogy programs have implemented the charts.  Unfortunately, neither is functional.  First, Progeny’s Charting Companions for FTM, PAF Ancestral Quest and Legacy features ‘Trellis charts’.  I downloaded and installed the evaluation version Charting Companion for FTM, but the program presented an error message that indicated I should update FTM 2010 to 19.0.0.207 on start-up and failed to open the data file.  The latest version for FTM 2010 is 19.0.0.206.  Second, Geneapro’s own website states that it does not provide the full functionality yet.  Furthermore, I failed to install this software, due to inadequate documentation on external tools required.

Online Search and Index Adventures with Ancestry and Findmypast

This information came from some sporadic correspondence, between 2005 and 2008, with a contact made through Genes Reunited.  According to this source, Tryphena was the daughter of John Bull (a grocer) and Mary Osborn of Brackley, Northamptonshire, making her my great grand aunt and my mum’s grand aunt.  Is this true?

A quick check at FreeBMD confirms that a marriage did occur between these two people (Oct-Dec 1874 quarter, Pancras registration district, vol 1a, page 46).  Pancras is in London, so there does not seem to be a connection to Brackley.  From Typhena’s age on census records (1881-1911) after her marriage, I conclude the likely a date of birth is 1843, with a range between 1843 and 1846.  These records contain no information about her parentage, but earlier censuses should.  I found 3 Tryphena Bulls in 1871. One was married and one was too young, leaving just one possible Tryphena, born ca 1848 in Northamptonshire, a servant to George Knapp in St Clement, Oxford.  Well that is closer to Brackley, but still provides no information on Tryphena’s parentage.  The 1861 census does contain evidence that Mary Bull, a retired grocer’s wife, was Tryphena’s mother, but it may not be simple to find this record.

A search on Ancestry gives this result:

What does Tryphena Robbins [Tryphena Bull] mean?  Ancestry users can submit corrections and alternative interpretations that may be added to the index.  Such additions are enclosed in square brackets.  In this case, the addition is helpful and made it easy to find this record.  The same search on findmypast yielded no results.

According to the transcript (follow the ‘View Record’ link) this household contains the following people:

So, how does this compare with the census page?

The transcript incorrectly combines two households.  The ‘No of schedule’ and ‘Inhabited house’ entries and building delimiters indicate that Mary Bull’s household is in a separate building from William Robbins’ household.  The ‘Do’ next to the name Mary Bull indicates repetition of the surname above, so the index rendering of the name as Mary Bull Robbins is strictly correct.  However, I believe this an error made by the census enumerator as dittos are usually restricted to within a household.  It is important that indexes accurately reflect the original records including errors, but interpretive additions are useful.

Given the index issues with this census household, how should I cite the record so that you do not have to rely on searching an index, can find an image on an alternative website, microfilm and the original?

The county, civil parish, enumeration district and image number is the information needed to access census pages by browsing the census collection in Ancestry’s Card Catalogue.

The National Archives reference reflects the archival arrangement of the original records at Kew.  It is used for microfilm copies, so many citations from the pre-internet era are in this form.  Findmypast’s Census Reference Search uses the TNA reference, providing a direct route to the census page.

I like Ancestry’s browsing capabilities, because it allows me to easily examine the context and sometimes no index can make sense of the records.  I prefer Findmypast’s reference search because it is consistent with well established British citation practice and quicker.  I would like all of the elements of the citation to be embedded in the digital images I download in a form that could be read by my genealogy software.  That would make keeping track of my sources much easier.