Illegitimate Children and a Widow’s Reluctance to Remarry

Dave Annal’s talk, “Lying Bastards”: the impact of illegitimacy on the records that our ancestors leave behind at the Register of Qualified Genealogists conference last month (September 2021), has stimulated me to tell the story of Maria Lown’s illegitimate children.

Betsey Makeman bastard daughter of Maria the Widow of William Lown, who was a Farmer living in the Fields below the Town.  She lives in a small House in the low Fields. This woman’s moral depravity is so great, that she prefers living in a state of Adultery with one Wm Makeman, to a state of Matrimony with the same Man!!

VIDE Dec 29th 1815 [Dec 9th].  NB. This abandoned woman might be Married but will not ! The Banns of Marriage have been published, but she prefers a state of Prostitution!  Remarking or having remarked, that She is already a Whore; & can be no worse.  Therefore, will even remain as she is!!! Sic malimores pravalebunt!!!  She submitted to be Married in August following

Given these comments what might you expect Maria’s background to be like?  Do you think she was accurately described?  Are you imagining her response was a potty mouthed torrent?  Has pity for a poor widow stirred you?  It is hard not to react to these entries, but let’s take a step back and look at the circumstances more closely.

Maria Copeland married William Lown in 1799.  She was his second wife, so became stepmother to his two children, Ann, and William, from his first marriage with Sarah Watson.  Maria and William Lown went on to have six children between 1800 and 1807, namely William, Moriah, Elizabeth, Snelson, Ann and Robert Snelson.  William Lown died in 1812 and was buried at Holbeach, a neighbouring parish.  There are no burials for any of the children indexed prior to his death, so I’m working on the basis that they had all survived to 1812.

So, at the time of becoming a widow, Maria had up to eight children to support.

Rapid remarriage, or the alternative of forming a joint household without marriage, is widely cited as an economic necessity for many widows.  Does it apply to Maria?

The 1815 baptism above identifies William Lown as a farmer and residence at “Fields below the Town”.   The occupation is a clue that William Lown may have owned or rented land.  I have not investigated land holdings in Whaplode, but he is in the manorial property records in neighbouring Moulton.

William Lown bought a copyhold plot of 6 acres 36 perches, consisting of two fields with a messuage (house) and outbuildings, in 1805 in the Manor of Moulton Harrington, located on the former common  near the hamlet of Seas End.  It is about 3 miles north of Whaplode village centre.  All records of the Lown family place their residence in Whaplode, which suggests that at least the house in Moulton and possibly the whole holding was rented out.

Why would a widow resist remarriage?

As a second wife, Maria was vulnerable to inheritance under primogenitor, which would have left real property to William Lown’s eldest son (aged 18).  Furthermore, she was potentially vulnerable due to customs of local manors that removed dower rights.  As a widow, Maria may have gained control of assets through guardianship of her children (eldest aged 12) and stepchildren (eldest aged  21).

William Lown did not leave Maria helpless.  He made a will appointing her as executrix, so she had control of the Lown family property.  I have not yet accessed the will at Lincolnshire Archives due to the pandemic, so don’t know the value of his estate.  It does not seem that Maria would  have needed to remarry through necessity straight away.

Social status is another possible reason for Maria Lown’s reluctance to re-marry.  She had been a farmer’s wife.  William Makeman was of lower status.  The baptisms of William Makeman’s legitimate children display an advancement in his status from labourer (1818), to horseman (1819, 1822) and then cottager (1825, 1826).

What happened to the illegitimate children?

William died on 21 September 1817, just 5 months old and less than 2 months after his parents married.  None-the-less curate Samuel Oliver continued his commentary in the same vein.

William Bastard son of the Widow, Maria Lown, A prostitute

Betsy was acknowledged by her father and was named Betsy Makeman when she married in 1839.  She married James Cooley, schoolmaster of Moulton, son of John Cooley, a farmer.  This was a good match as I know from my research of the Moulton manors that the Cooley family were significant landowners.  The marriage was performed by the same curate, Samuel Oliver, but without any commentary.

Why were the curate’s comments so vitriolic?

Samuel Oliver did not comment on every illegitimate birth beyond use of the term ‘illegitimate’.  In the 3 years between 1815 and 1817, there were 11 baptisms of illegitimate children out of a total of 170.   Apart from Maria, one other person was the subject of vitriolic comment, this time a man who had child with another woman having abandoned his wife

Maria certainly answered back.  Was there dose of misogyny in his reaction?  Did he think a farmer’s wife should behave differently?  Did he fear that Maria might become dependent on the parish if she did not remarry?

In honour of my parent’s Golden Wedding Anniversary on 1 September 2012, I pledge to publish 50 marriages, one for each year of my parent’s marriage, of people that appear in the joint family tree.  I plan to achieve this over the coming year, so that means weekly, with a couple of weeks off. 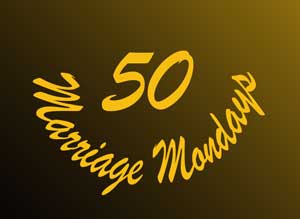 Even though Wilson is a common surname, I wondered if it could possibly be true!  The first step in verifying the will is to find records of the three marriages.  English civil registration started too late (1837), so my best option is to turn to parish registers starting with Claverley, the place most strongly associated with the couples, followed by Bushbury and Alveley.  The 40 years prior to 1833, the date the will was made, is the most likely time frame.

Normally I would use the IGI and any other online resources I could find to narrow down which original registers to examine. Viewing the originals could possibly entail travelling from Norfolk (on eastern side of England) to the visit the Worcestershire, Staffordshire and Shropshire County Records Offices.

But I was in Salt Lake City, Utah, USA, the home of the Family History Library (FHL), the largest in the world.  If you are wondering what I was doing in SLC see my previous post.

How much clobber do you take to archives, repositories and libraries?  Notebook, laptop, camera, pencils, change for photocopies, library card or other identification, spare batteries for gadgetry, …  You could probably add to the list.  I wanted to travel light, so I left the heavy stuff behind.  I could have taken just this:

Yes, a flash drive!  Not an empty drive.  It had my research plan, copies of related documents and other stuff on it.  I used one of the many computers in the library to read the contents of my flash drive and consult the catalogue.  All the records I consulted were available on microfilm or fiche, so I used the free film scanners to copy the records I wanted directly onto my flash drive.

Getting back to the three marriages project.

First, I found that a published transcript of the Claverley parish registers was available:

The will indicates Elizabeth married Joseph Wilson of Bushbury, so why is he recorded as of Chetton on the marriage?  Chetton is ca 15 km west of Claverley.  Bushbury is in Wolverhampton ca 15 km NE of Claverley.

Then, I searched the FamilySearch index for a marriage between John and Dorothea Wilson which lead me to this:

This clearly seems to be the marriage of our Dorothea, but why is she recorded as being resident in Brewood, and not Claverley?  Brewood is near Wolverhampton, ca 13km ne of Claverley.    This is the bishop’s transcript, a copy of the original register that was submitted to the bishop periodically (usually quarterly).

So, these do look like the marriages of William Wilson’s daughters, but not all the details match up.  How many other Wilsons were there in Brewood, Chetton, and other locations?  If the husbands were as mobile as seems to be indicated, then I should check surrounding areas to rule out other possible men of the same names. 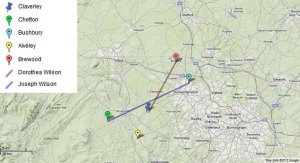 Before I can truly claim to have cracked the three Wilson-Wilson marriages case, I need to:

Lots still to do then!