This week’s entry in the 50 Marriage Mondays series took place on a Saturday and the banns were read on Tuesdays.

The Marriage Act 1753, commonly called Lord Hardwick’s Act stipulated that a marriage would be void if it had not been preceded by the reading of banns or the issue of a licence. Public notice of an intended marriage gave objectors the opportunity to make their case against it.  The act further stated that the banns should be published on three consecutive Sundays.  The banns for this marriage were published on the 6th, 13th and 20th October 1908, three consecutive Tuesdays.  However, this would not invalidate the marriage.  Although the law made publishing of banns mandatory, it only gave directives on the details of the procedure.

The Marriage Act 1823 simplified procedures, only requiring the parties to give their true names and abode to the clergyman, but introduced a time limit of three months after which banns would have to be republished[1].  This marriage, solemnised 2 months and 27 days after the publication of the first bann, was just in time.

I do not have a wedding photograph of Jue and Billy, but do have some later photographs.

Top: extracts from photo of wedding guests of Albert Walter Coulson and Mabel Maud Blanche Hilda Knock 29 Oct 1913.
Middle: undated and unlabeled photo in Mabel Coulson’s collection, the couple are clearly Billy and Jue in middle age
Bottom: extract of photo dating from WWII of Billy, Jue and their children, see earlier post (A Wartime Wedding) for the full picture, photo in collection of Raymond Coulson

The witnesses, Albert Walter Coulson and Lizzie Coulson were siblings of Jue.

Relationship of Julia Ann Coulson & Albert Herbert Willie Proctor to the witnesses of thier marriage.

Photographs in collections of several family members feature people that have been identified as Jue, Billy and the two witnesses.

On first appearances, it is not obvious from the wedding photograph that this week’s entry in the 50 Marriage Mondays series occurred during World War II. The couple have been identified as:

Wedding of George Cobbold & Mabel Proctor
Charles Proctor is behind the groom, possibly the best man. At the right are the bride’s parents Billy and Julia Proctor.

Despite the 1942 date, no-one in the wedding photo is in military uniform. This photo comes from my grand-mother’s collection. Another photo from the same collection depicts the Proctor family including 2 sons in uniform, clearly dates from World War II.

Notice that the mother of the bride, Julia Ann Proctor (nee Coulson) is wearing the same dress in both photos. This could suggest that the photos were taken around the same time, but clothes rationing during the war could have caused Julia to keep her dress for several years.

On checking the marriage index, I confirmed the marriage occurred in the October – December quarter of 1942 in the Gipping registration district and provides middle initials of M for Mabel and R for George. Although it is difficult to estimate the age of people based on a photo, George looks like he was aged between 20 and 40, so would most likely have been eligible for military conscription. The best fit in the birth index is for a George R Cobbold in January-March 1914 in the Cosford registration district, which would make George about 29. Possible reasons why George was not in uniform include personal choice, being in a reserved occupation, conscientious objection to military service, and health conditions.

Wondering which occupations were reserved but not having found a reliable reference online, I posted a question on the recently established Genealogy and Family History Q&A website on StackExchange. A prompt answer lead me to an article in The Times [1], and provided a reference at The National Archives (LAB25/97). The Times Digital Archive 1785-2006  is available through academic institutions and libraries.

This week’s post in the 50 Marriage Mondays series is another case of verifying what a relative told me some years ago.

FreeBMD, which stands for Free Birth, Marriages and Deaths, provides an online searchable version of the General Register Office (GRO) Index of Civil Registration in England and Wales from 1837 to 1983.  The ongoing project is run by volunteers and has now substantially completed  transcription of the marriage index up to 1950.

The search page provides a number of search parameters, but for this example I entered the couple’s names and a data range from 1930 to 1950. 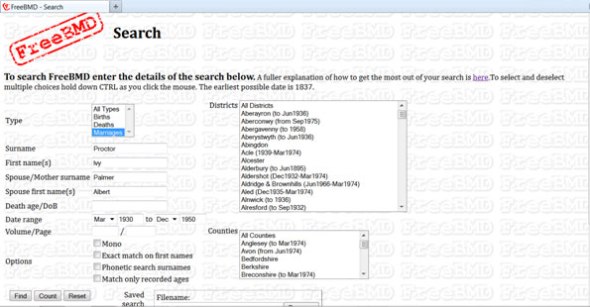 Strangely, my first search, where I entered the bride and groom the other way round, yielded no results.  My second search gave one result.

It is always worth tweaking search terms and trying again as mistyping search terms and index errors can cause a search to fail.  In this case it turns out that in the entry for Albert Palmer, the spouse’s surname was transcribed as Procter because it is not clear on the original.

Ivy Proctor’s birthplace, Hitcham, is not in this list.  How far is Hitcham from Gipping district?  A map is the ideal tool to visualise relative locations.

England Jurisdictions 1851 and A Vision of Britain

Both these websites use Geographical Information Systems (GIS) technology to present maps of administrative units that existed in the past.  FamilySearch’s England Jurisdictions 1851 is the more user-friendly implementation, but is limited by its focus on a particular time.  A Vision of Britain is much more comprehensive and includes the history of a wide range of administrative units.  As a product of a major academic project undertaken in the 1990s, the Great Britain Historical GIS, the website implementation is showing the age of its origin.  The links to the boundary maps, and history of administrative units (important and useful to the genealogist) are not prominent. The boundary maps respond slowly, lack interactivity and support for pointing devices, and display only one administrative unit.  Despite these limitations, it remains an invaluable tool.

Knowing the administrative unit that handled the marriage registration gives us clues about where relevant records may now be held.  I could simply order the marriage certificate from the GRO as a way of accessing the copy register submitted to the Registrar General.  However, the two original registers are at: